Building in Dual Universe can be separated into three categories: Building, Crafting, and Manufacturing. These three activities provide the mechanics necessary to produce virtually all of the products used by players, from equipment to orbital stations. While the processes may vary greatly, all three activities require the use of resources obtained through mining or trade, as well as materials and elements created from those resources.

The process of using raw materials to create a construct, be it a spaceship hull, house, outpost or space station. Building any object requires at least one Core Unit, an element necessary to generate a building zone where you will be able to create a construct. [1] Within a building zone, a special jetpack mode can be engaged, whereby the player can exercise precise control over their position, in order to reach all areas of the construct. Construct details can be freely edited down to 25 cm in scale [2].

While working inside a building zone, a player can copy and paste sections of the construct, thus greatly accelerating the building process. Furthermore, a symmetry mode allows the player to define a selection of voxels which can then be mirrored, to make building symmetrical constructs easier. The system also features undo and redo commands.

The building system will feature a wide variety of tools designed to aid in the construction of irregular shapes. These tools can be loosely separated into two categories: creation and modification.

Creation Tools allow the player to add or delete shapes from a construct through the use of simple 3D shapes, such as spheres, cubes, and prisms. The line tool also allows the builder to create linear, irregularly shaped volumes between two existing surfaces. When selecting an area in which to place voxels or elements the shape outline will display in one of three colors:

Modification Tools, such as the smoothing or paint tools, allow the user to modify the shapes and properties of the construct in order to create the desired shape or design.[3]

Voxel Elements are pre-created or player-created complex shapes that are intended to streamline the building process. A Voxel Element could be anything, from a spiral staircase to a specially designed aircraft wing, that has been created by the player and saved for later use. These elements can then be used in later constructs, to prevent the builder from having to continually re-make complex designs. Additionally, these elements can be placed using a different material than the original design.

Mesh Elements are pre-created functional components such as engines, control consoles, sensor arrays, weapons, and so on. These elements have predefined statistics and functions as determined by Novaquark [4]. These elements are intended to be the primary points of interaction between players, constructs, and the environment. Furthermore, these elements can be effected by custom LUA scripts that may alter the interactions of mesh elements with each other and their environment.[3]

Physics effect the creation and operation of constructs. The placement of directional units and engines on a construct effect it's flight pattern, acceleration, turning speed, and a number of other factors critical to creating an efficient vehicle. For example, a square shaped construct with four hover engines, all placed on a single side of the square, may be unstable because the engines are exerting lift unevenly, which will prevent it from flying strait, if at all. 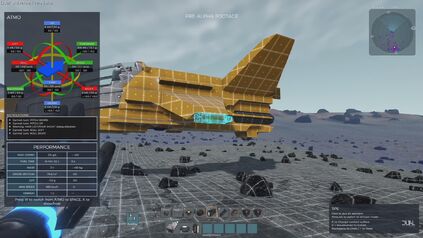 A pre-alpha image of the information window

When working on a dynamic construct, a window will appear (pressing V on the keyboard) which provides valuable real-time information to the player building the ship. There are three main sections in this window:

What is needed to build an atmospheric ship? [5]

Other elements can be added to the ship but are optional.

When a construct is finished being built, the player can create a blueprint master from it. This blueprint can be used to produce copies of the construct using an Industrial Unit, when combined with the same amount of resources, materials, and/or elements originally used in the construct.[1] Copies of the blueprint can also be made to sell or give away. However, future changes to that construct will not be reflected on existing blueprints. Every time a change is made to a construct, a new blueprint master must be created if the player wishes to manufacture copies of that construct from an industrial unit.

Crafting is the process of refining resources into materials, or materials into elements through the character crafting menu available to all players in game.[6] The crafting menu can be accessed by all players anywhere in the game (even in build mode), and they can use that to create materials and elements, so long as they have the appropriate items in their nanopack. As such, crafting is the most basic item creation process, but also the most time intensive, as it cannot be automated. Players can use industrial units to automate many of the functions of crafting, but that process is known as manufacturing