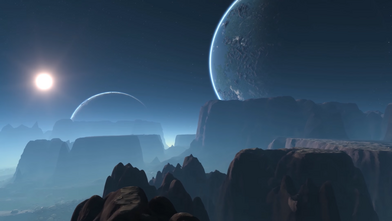 The game world in Dual Universe consists of many procedurally generated planets, moons and asteroids, all of which are composed of voxels and have their own set of resources which can be mined by players. These all are contained within a single vast star system - The Helios System. There are additional systems intended to be added in the future but as of this writing it is only the Helios System.

The distance between a planet and it's moon(s) is relatively small, but the distance between two planets may be much, much larger, and the distance between star systems is vastly greater than that. For example, traveling from the surface of a planet to the surface of it's moon may take a matter of minutes (~4 minutes in a recent developer video)[1], while traveling from planet to planet without a Warp Drive will take many times longer than that. Even with warp drives, traveling between solar systems is designed to take "a very long time," currently believed to be on the order of real-world days, if not weeks. However, this time can be greatly reduced by building highly expensive and advanced Stargates, though details about this process are very sparse at this time.

To help players, the player can enable Marks (called by pressing V) which gives information about the player environment, and green waypoints will localize territories[2],planets ,constructs and players.

In between these worlds is open space. Players are free to fly anywhere in space and explore anywhere on any world, though the proper technology will shorten the length of the journey. The world in Dual Universe is designed to give players the ability to enjoy an emergent, open-universe game world where anything can happen and they are free to decide their destiny for themselves.