The Mission system is a way to create tasks for you or other players to complete for a set reward. It can be opened from the tab menu or by pressing F8.

Hauling missions are missions where you move a packaged item from one place to another. You can set a hauling mission to pick up or drop off items to a Parcel Container or to sell at a Market, and each mission will indicate the distance to the start location, distance of the trip, whether or not it passes through a pvp zone, the time it has left before it expires, reward and collateral. Hauling missions can be set to last for a maximum of 1 week.

All items need to be the same type when packaging items to Haul and Sell.

Aphelia issued hauling missions are available by selecting the search icon. The Aphelia missions are offered in two types Classic and Special

Classic missions are persistent, do not change, have a reward of less than 200,000 quanta and the player has 31 days 108 min to complete the mission.

Special missions offer the player a random selection of missions greater than 200,000 quanta reward and are changed every day at 10:00 UTC and the player has 24 hours to complete the mission. All Aphelia missions require the player to use conventional engines, warp drives are disabled while packages are on board the player ship. Players can stack missions, but must take and complete missions in person. See the list of all Aphelia Missions

A player can create jobs of any type, including hauling, pvp, taxi services and more. Unlike the dedicated hauling missions, they are not scripted, do not require collateral and can only be set for a day.

Every player has a reputation rank as either an issuer or responder to player missions. All players can view reputation ranking which scales from 0 to 5.0

A player can gain reputation if:

A player can lose reputation if:

The reputation feedback popup will appear when a player opens the mission window (F8) after completion. The popup will only appear once and the feedback is binary. 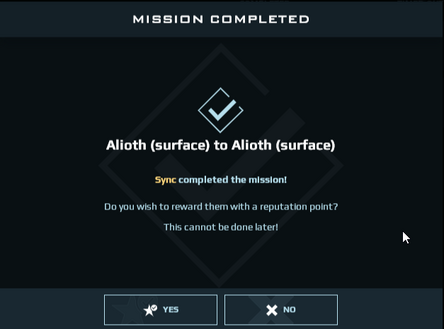