The universe contains many planets that players can visit, explore, mine resources from, and build constructs on. All planets are procedurally generated by the server[1], and as such their surfaces are generated randomly within predefined conditions. These guidelines often include a theme determined by various biomes (Icy, Desert, Forest, Meadow etc).[2]

Each planet is dominated by a single environment, or biome, and may have one or more moons. All planets contain different resources, forcing players to explore multiple planets and moons to gather all of the materials that are required to build various types of constructs. These resources may be found on or below the surface. Each planet and moon contains all t1 ores.

All planets are made out of voxels, down to a depth of five kilometers.[3] These voxels are completely editable. They can be collected and deployed using a nanoformer, or they can be built on with other voxels from an external source.

Planets and moons are fixed in their position and do not rotate in any way. The light source travels around the Helios system. Locations are governed by a position system that identifies exact locations on planets and within space. The in-game Map System allows the player to view all planets, set locations and keep bookmarks of places of interest.

A moon is a natural satellite of a planet. Moons tend to be smaller than planets, and are relatively close to them. While planets can be spread out and relatively far apart, a moon always sits close to its parent planet.

The environment and resources of a moon can differ greatly from those of their parent planet, they are usually barren, lack atmosphere (hover and atmospheric engines will not work) and have very low gravity.

In Dual Universe there are two possible types of asteroid you can encounter. The first type of asteroid is a naturally occurring volume of voxels, connected to a planet or moon, such as the "asteroid belt" surrounding the planet Thades. Unlike planets and moons however, they are usually relatively small, non-spherical, and have no atmosphere. It is possible to fly to and build on these "asteroids", as they are made of voxels and completely editable. Some asteroids are large enough to have their own gravity.

The second type of asteroid you may encounter are individual constructs. This type of asteroid is actually a minor astronomical or celestial body which are neither part of either a planet or moon. These can be mined for resources of different Tiers dependent upon location. The asteroids have one of the 5 tiers (basic, uncommon, advanced, rare, exotic) and contain mostly one ore of the equivalent tier, but also a low amount of higher tier ore. In the safe zone one there can only be basic and uncommon asteroids.

A "DSAT Unit" or "Deep Space Asteroid Tracker" is required to "track" asteroids.

When the "DSAT Unit" active, the detected Asteroids will have 3 "Phases of Discovery"

Players will be led through a series of 5 waypoints that they must travel to within 10 km to activate the next waypoint, this process eventually leads to the Asteroid location at the fifth and final Waypoint. See page on Asteroid Detection and Mining for an in-depth study on the topic.

Helios is this systems sun and although the majority of physics within Dual Universe are based on Newtonian Mechanics there are some objects that do not obey these laws. Helios is not a physical body or object in space that you can locate or visit. It does not have a position in the Atlas, bodies do not orbit around it and it has no gravitational influence on the player or other bodies. It is better to be viewed as a light source, while on a planet Helios ( the light source) will rotate around it, much to the horror of Nicolas Copernicus, giving the stationary player on a planet 5 hours of daylight and 5 hours night. At one point the movement of Helios was governed by the players computer clock, since Demeter update this is no longer the case. Helios takes 10 hours to circumnavigate the system. The skybox (stars) are fixed but the nebular and gas clouds are not stationary and rotate with Helios and at the same rate. 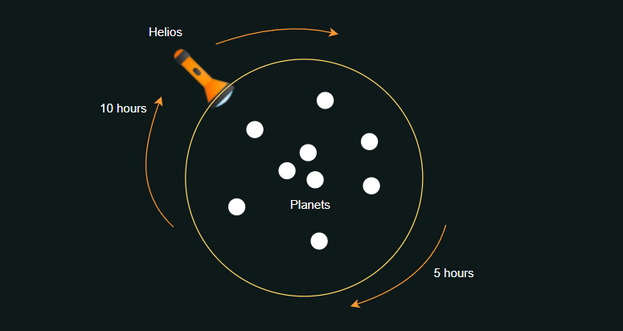 This does mean that there are solar, lunar and planetary eclipses, depending on your location.