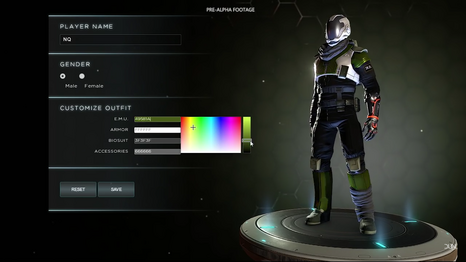 As a result of Dual Universe's single-shard universe, all player characters are persistent within the game, and can be seen and interacted with by any other character within line of sight. There are no private instances or spaces in which your character is removed from the game universe.

All player characters are human, and there are no current plans for expanding racial options in the future. However, at this time character race has no gameplay ramifications.

Within the game, the characters are all colonists sent on a mission to continue humanity away from a doomed Earth. They are virtually immortal, as resurrection nodes allow them to be reincarnated in the event that they die. (See Main Page: Lore)

The character be male or female, and currently four different parts of the character's suit are color customizable. Character can also equip pets, gear, weapons, and other upgrades that change their visual appearance and game statistics.

There are no other character customization options at this time, but this feature is expected to expand in the future.