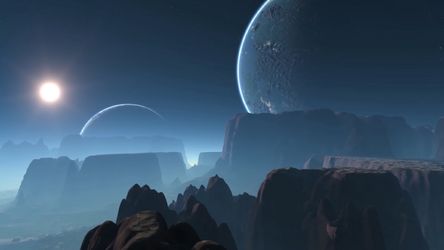 Procedural generation in Dual Universe is the random generation of terrain within predefined constraints on planets, moons, and asteroids. This only includes the generation of features on the surface of planetary bodies down to a few kilometers, but may shifted to the generation of naturally occurring caverns and other underground features.[1] It may also be extended beyond terrain to include the procedural generation of atmosphere, flora, or fauna. While there is essentially no limit to what can be done with procedurally generated terrain, more complicated attributes like animals will most likely be limited to a pre-made pool of assets. Nevertheless, what assets are generated, and when, is still an aspect of procedural generation.

The Technology behind procedural generation is focused on how the voxels are displaying throughout the universe. Each voxel is not stored on the servers, but rather generated in real time by algorithms as players approach their location.[2] This goes even one step further, where only the modifications to planetary bodies are saved on the servers, as opposed to the entire modified voxel.[2] This limit the overall load on the servers to provide a better experience for players.

With procedural generation, there is no limit to the potential number of planets as they are basically "free" to create. However, large numbers of planets aren't really meaningful to an MMO community; what matters, in the opinion of NovaQuark, is gameplay and player interactions. Are those planets going to be interesting for the players, or just feel empty and all the same? It has already been seen in other games that having an immensely huge "playground" can quickly give a feeling of emptiness if it's not filled with proper content.

(Note: What follows is the plan of NovaQuark, in their words, but this feature may or may not make it into the official release, and could be implemented afterwards)

"Ideally, We plan to handle our game universe under the form of a galaxy that can be visualized on a map right from the beginning. This map is the "visible" universe. However, everybody starts at the same location - the planet Alioth - and will slowly expand from there by building more and more stargates to explore new near-by systems. This expansion will define what we call the "explored" universe, the part in which players can directly travel and interact. So the "explored" universe will be much smaller, at least at the beginning, than the "visible" universe.

Deciding to build a stargate will be a very strategic and costly decision. We will provide tools to help making the right decisions. The visible universe will be accessible to some very basic sensing techniques to obtain information about the composition of the stars, from which educated guesses could be made about the type of materials of the planets of this system, and potential mining opportunities. Because the explored universe will by player-driven, and that the decision to build an expensive stargate to new systems will carry meaning and will drive players to be active in the new system, the explored universe should never feel empty or boring. This will also help to keep the game size in proportion to the player size, which is a very important aspect to us."[3]

Don't you think using procedural generation will make the game repetitive in the end?[edit | edit source]

Procedural generation can be a powerful tool if used properly. That would indeed be a big risk if we were counting on this feature as the miracle solution to make all the content of the game. However, we use it only to quickly generate the planets with a decent environment. In short, we use it to make the scenery, but most of the content won't be made procedurally... as it is supposed to be made by players! Moreover, the fact that the game universe will grow at the same speed as the players explore their surroundings in space will also prevent (or at least greatly reduce) this feeling of repetitiveness.[4]